The festival begins on the third annual Stephen Lawrence Foundation Day. Aged 18, he was killed in a racially motivated attack on Well Hall Road, Eltham, London. In 2011, after years of campaigning by his parents and high profile supporters, a change in the double jeopardy law meant two of his five attackers were jailed for his murder.

Stephen holds a Lignum Vitae ‘Wood of Life’ tree which bears the national flower of Jamaica where he is buried, his parents’ ancestral home. 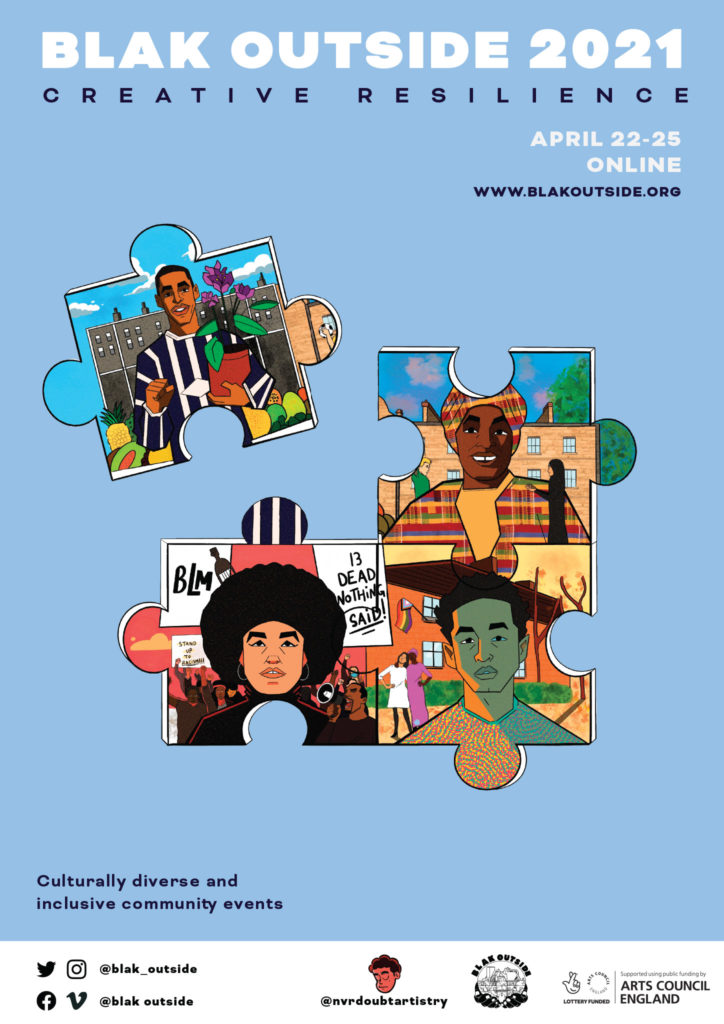 This years Blak Outside festival has the theme of ‘Creative Resilience’ following on from last years ‘Rooted’ which had two physical locations in 2020: Peabody Blackfriars Estate, Southwark and the Garden Museum, Lambeth both in London.

The festival was founded as a creative response to the heavy police presence on Peabody Blackfriars during the first Covid-19 lockdown in 2020. Two Dispersal orders were issued in response to an increased number of Black and Brown children occupying play and communal spaces with their siblings and friends from the area.

So this year we continue to be creative and resilient, producing four festivals!

Press the boots above for the 2021 festival programme

We use cookies on our website to give you the most relevant experience by remembering your preferences and repeat visits. By clicking “Accept”, you consent to the use of ALL the cookies.
Cookie settingsACCEPT
Manage consent

This website uses cookies to improve your experience while you navigate through the website. Out of these, the cookies that are categorized as necessary are stored on your browser as they are essential for the working of basic functionalities of the website. We also use third-party cookies that help us analyze and understand how you use this website. These cookies will be stored in your browser only with your consent. You also have the option to opt-out of these cookies. But opting out of some of these cookies may affect your browsing experience.
Necessary Always Enabled

Performance cookies are used to understand and analyze the key performance indexes of the website which helps in delivering a better user experience for the visitors.

Analytical cookies are used to understand how visitors interact with the website. These cookies help provide information on metrics the number of visitors, bounce rate, traffic source, etc.

Advertisement cookies are used to provide visitors with relevant ads and marketing campaigns. These cookies track visitors across websites and collect information to provide customized ads.

Other uncategorized cookies are those that are being analyzed and have not been classified into a category as yet.